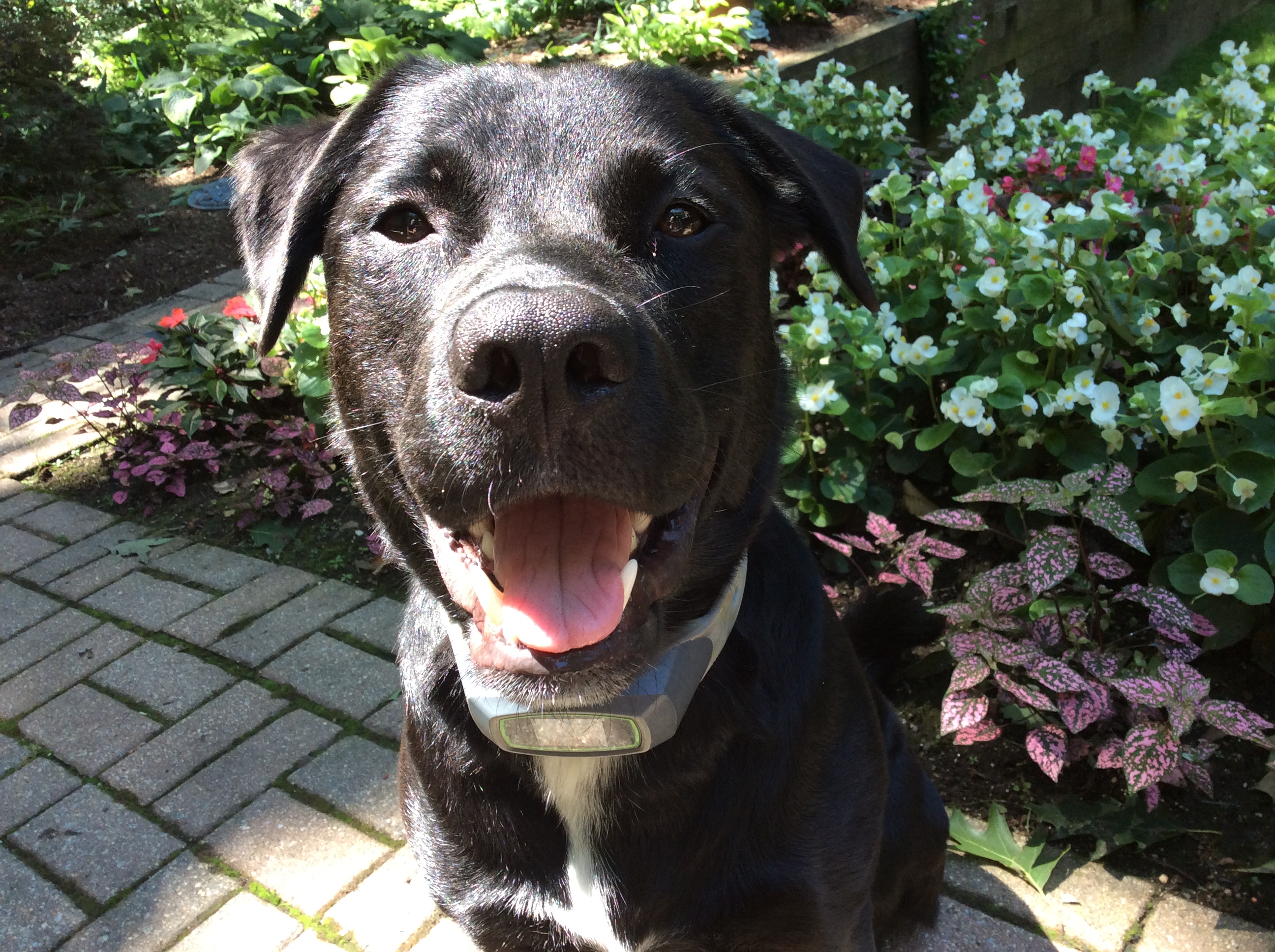 Meet Buster, a fearless and affectionate rescue
from Hartland, Connecticut! 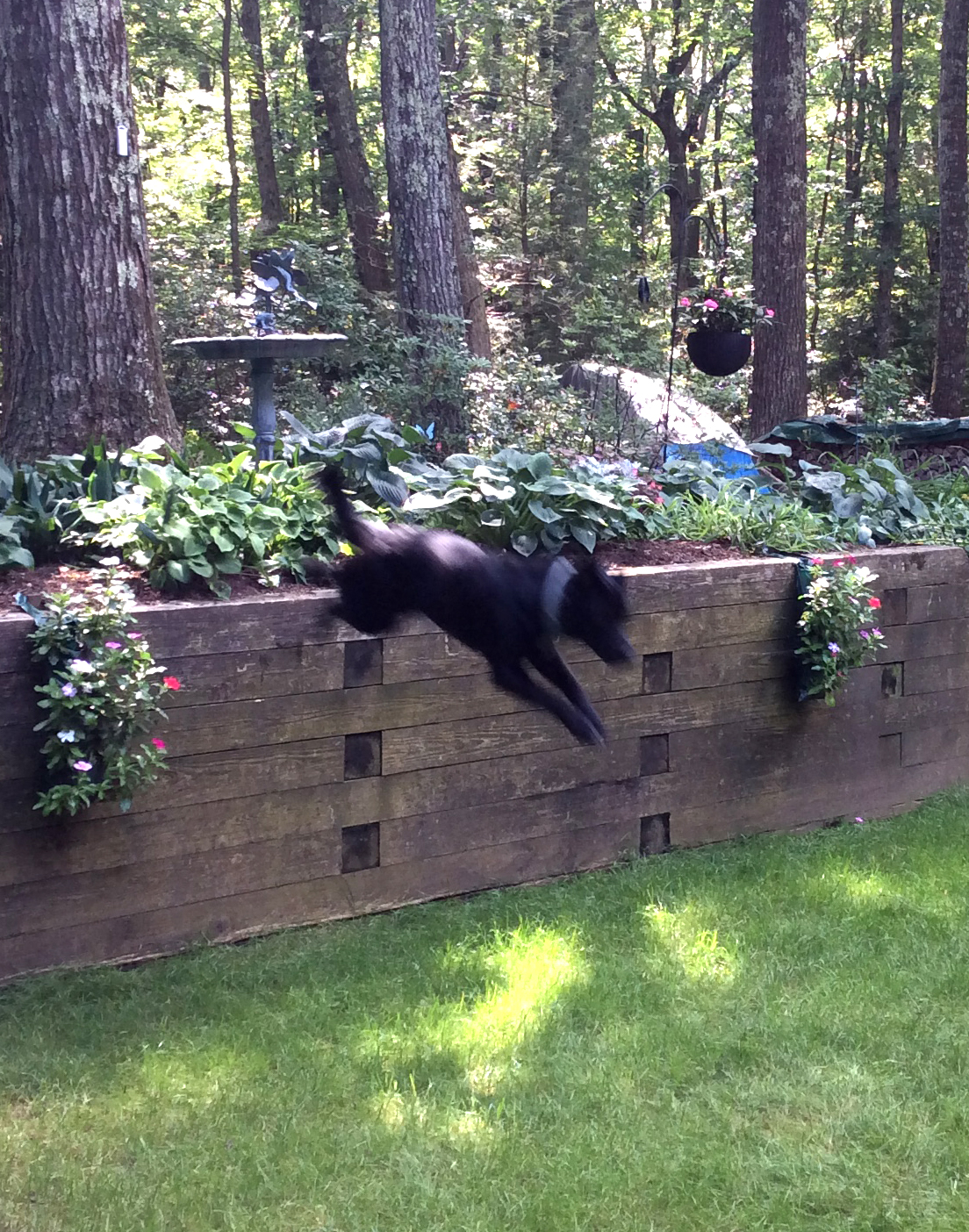 Buster's story began when Monica, his dog mom, started to look into rescuing a pup from Lucky Lab Rescue and Adoption.  She knew this was something she wanted to do because of the heartbreaking fact that many pups in the south end up getting euthanized even before a search for a forever home can be initiated. Buster seemed to be the perfect fit for their family, and he was pictured posing with the cutest head tilt, which he still does to this day! Buster was a 13-month-old Black Lab being fostered in Texas and was often described as an active “ninja” because he would bolt. A representative from Lucky Lab questioned them many times about being comfortable with the bolting, noting that they would probably need to get an 8 ft. high fence if the behavior could not be faded. It didn’t take long for them to feel like Buster was already theirs, and so, having had some experience with another grand dog’s bolting behavior, they decided to adopt Buster… and the challenge proved to be very real!

A pup that fears nothing

Buster has no fear, making the bolting even more of a challenge. He disregards all training and goes into the “predator zone” when he perceives things like chipmunks, squirrels and, blinking vehicles as prey. Buster especially liked (and still does) to chase bicycles and motorcycles. The day he took off after their neighbor on his motorcycle and ran a half-mile from home was the day that they decided to get a wireless fence. 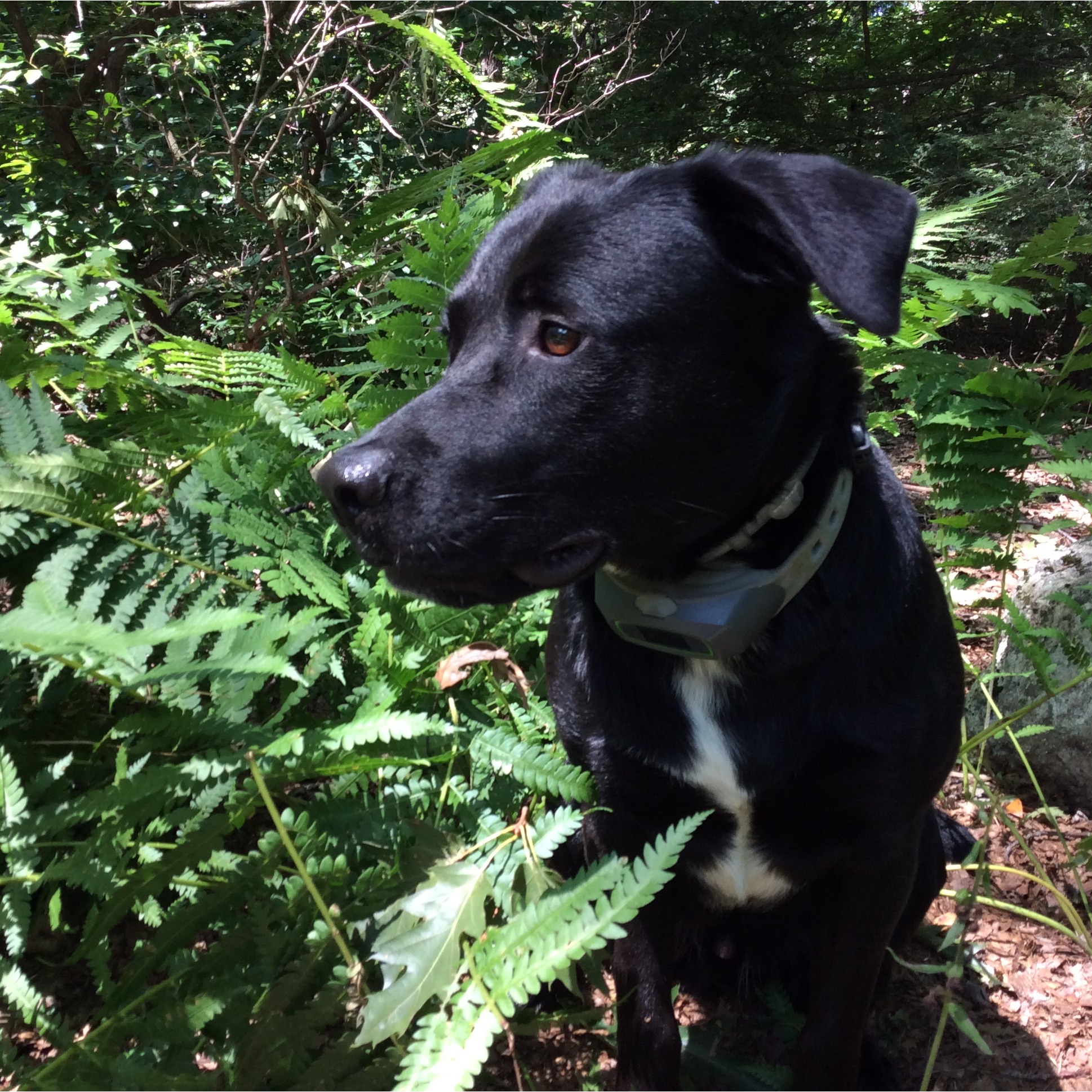 “Buster proved to be an unstoppable force when prey was involved... I followed the training guides to the letter and it worked!"

Monica’s property is about 3 acres, most of which is heavily wooded. This would have made it impossible to bury a wire. Now with SpotOn, Monica is free of guilt from having to have him tethered or on a leash by her side. Since he is free to roam his territory, they are both relaxed and can enjoy their time together outside much more!

They love their quality time together. Monica laughs every time Buster needs some lovin’ - he sits and gives his paw, gazing at her with those sad eyes, waiting for the invitation to hop into her lap… but he weighs almost 60 pounds! Nevertheless, they make it work until he decides he’d be more comfortable on the floor next to her.

Buster started with a small map of about 1 acre. After about 3 months of success using this map, this lucky pup got his map extended more into the woods to accommodate his love of chipmunk and squirrel chasing! His default map is now about an acre and a half.

“He now has the freedom to be off the leash and live the life we rescued him to have.  Worrying about Buster bolting has become a thing of the past.” 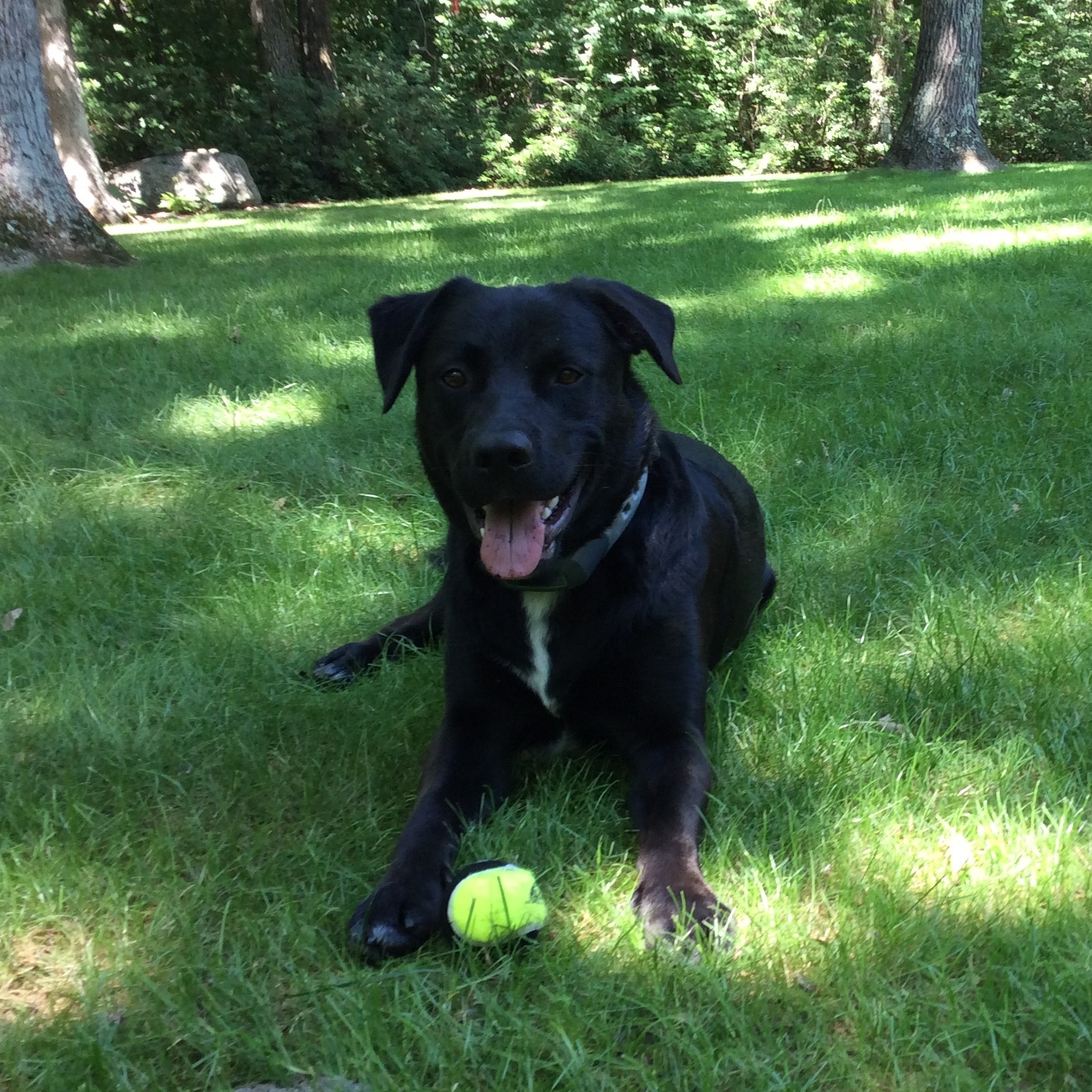 Buster is an athlete and keeps the family very well exercised!  He goes on a four-mile walk each morning and enjoys hide the scent sniffing games, tennis balls, stuffed toys, stick fetch, and catch the bouncing ball (some acrobatic leaps on this one) during the rest of the day. He always manages to keep himself busy chasing the small rodents on their property when his humans aren’t available to play. Though he has never has caught one, he does enjoy digging for them or sniffing the rocks and logs where they hide.

Buster also loves to prove his prowess by snatching very large branches, carrying them a distance, and then planting himself down for a good gnaw. He sometimes pulls rooted plants and bushes right from the ground in a game of tug! 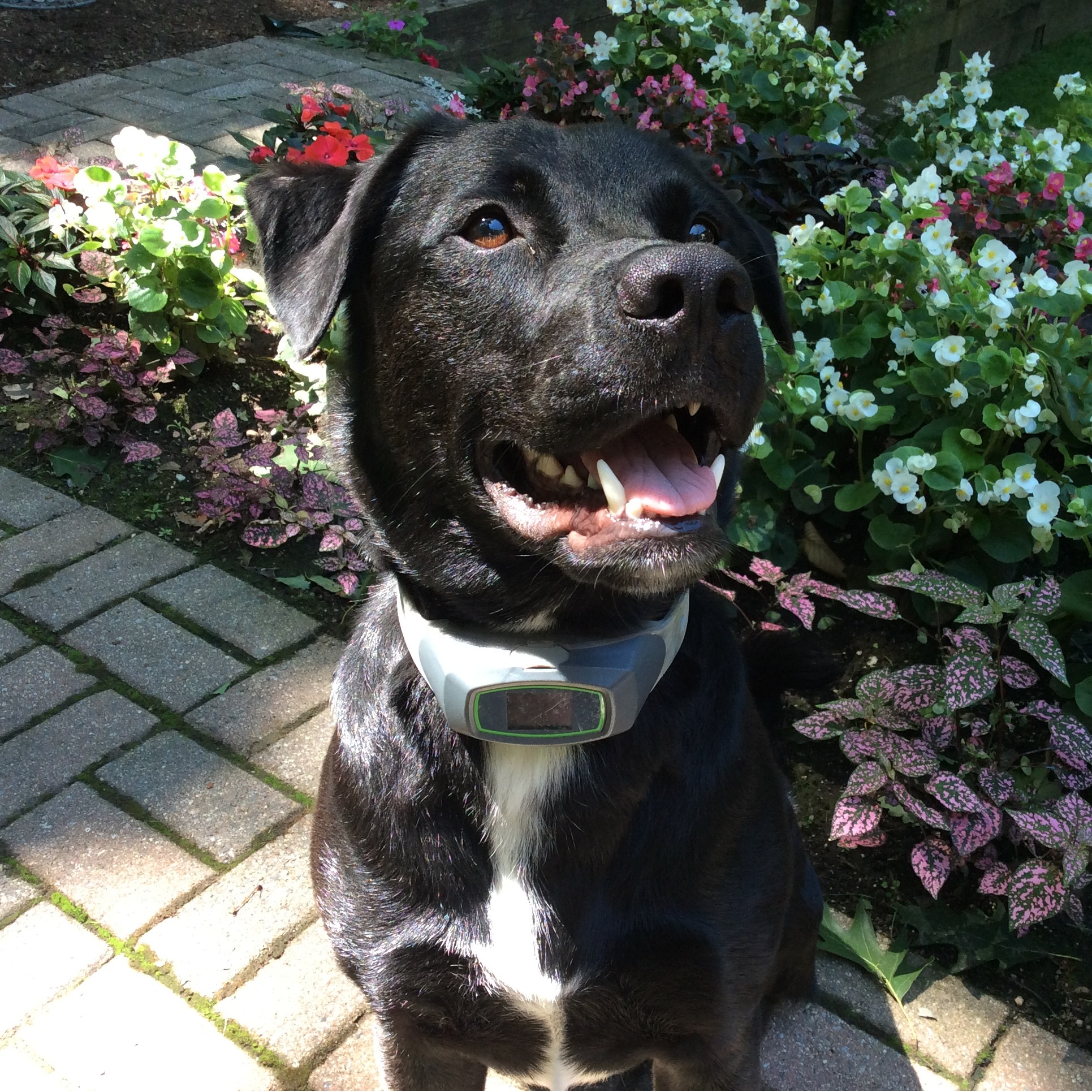 With all this new freedom, the family’s bond with Buster has only grown stronger. They have so many new adventures to look forward to, like endless games of fetch in their large yard, lazy afternoons gardening with Buster safely exploring his territory, and suppers outside with Buster tagging along (and of course begging for a bit of whatever they’re eating)! 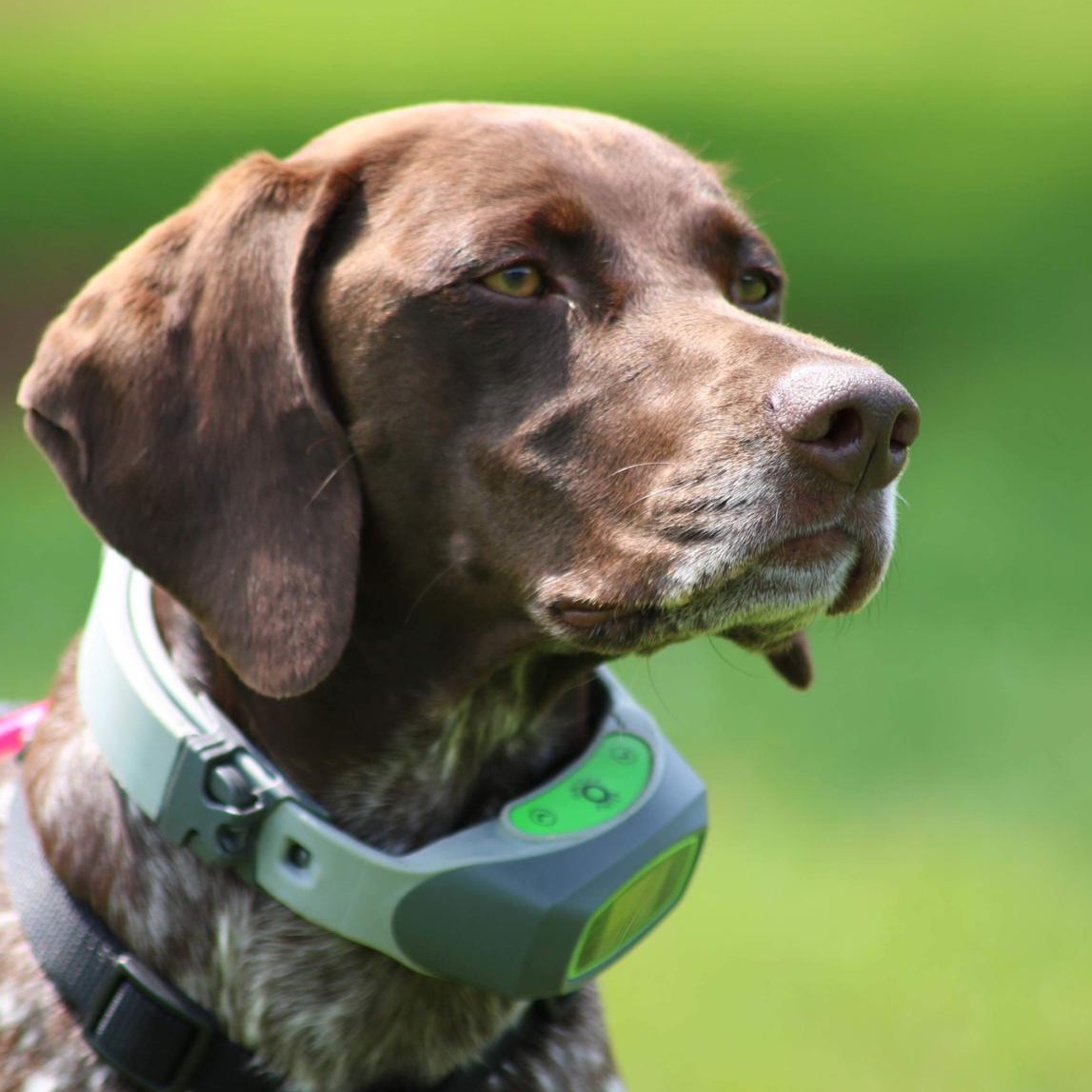 The World is Her Backyard: Finn's Story

Finn has a high prey drive, she absolutely hates chipmunks, they are her nemesis.... 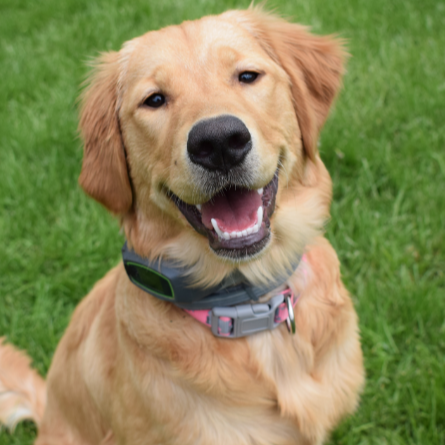 All dogs have their moments of weakness, and in Myla’s case, her weakness is her love of people.... 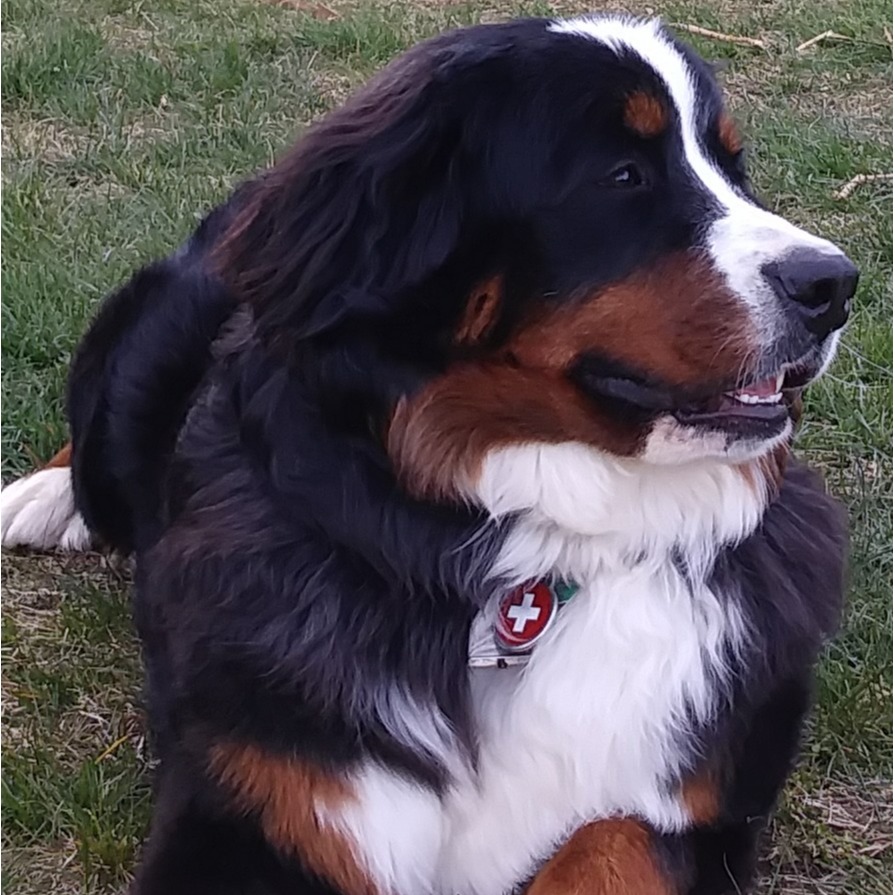 Before the SpotOn System, Lily would run down the road and get herself into trouble. Being the independent woman she is...