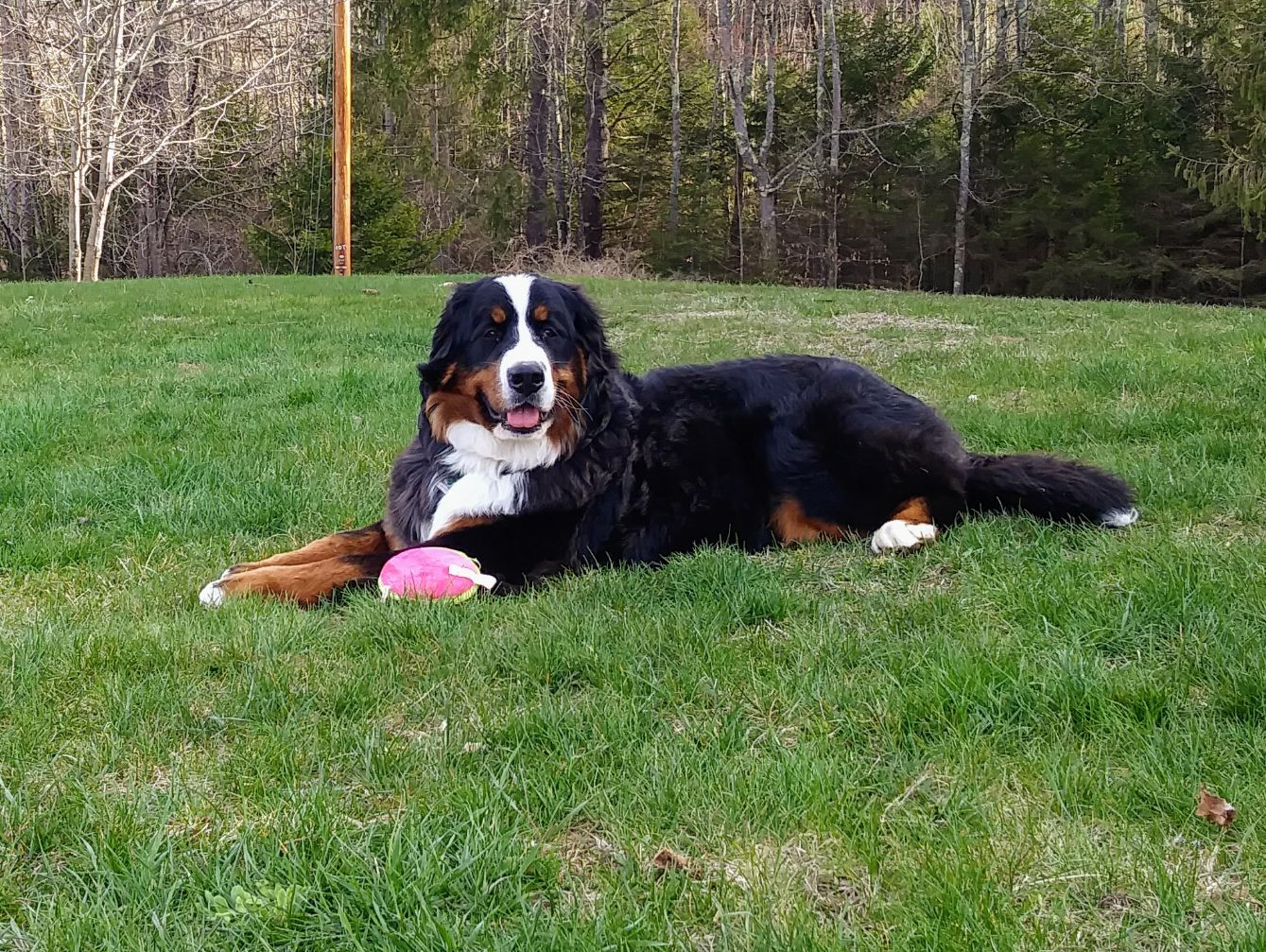 Meet Lily Mae, a mischievous Bernese Mountain Dog puppy!
Meet Lily Mae! Although she’s a New Hampshire pup, her dog mum, Debbie, lived in Florida for 35 years and decided to add a unique southern twist to her name. This pupper is only 9-months old and even though she’s already so big, she will continue to grow for another year or two (her breed can be over 100lbs when full grown)! 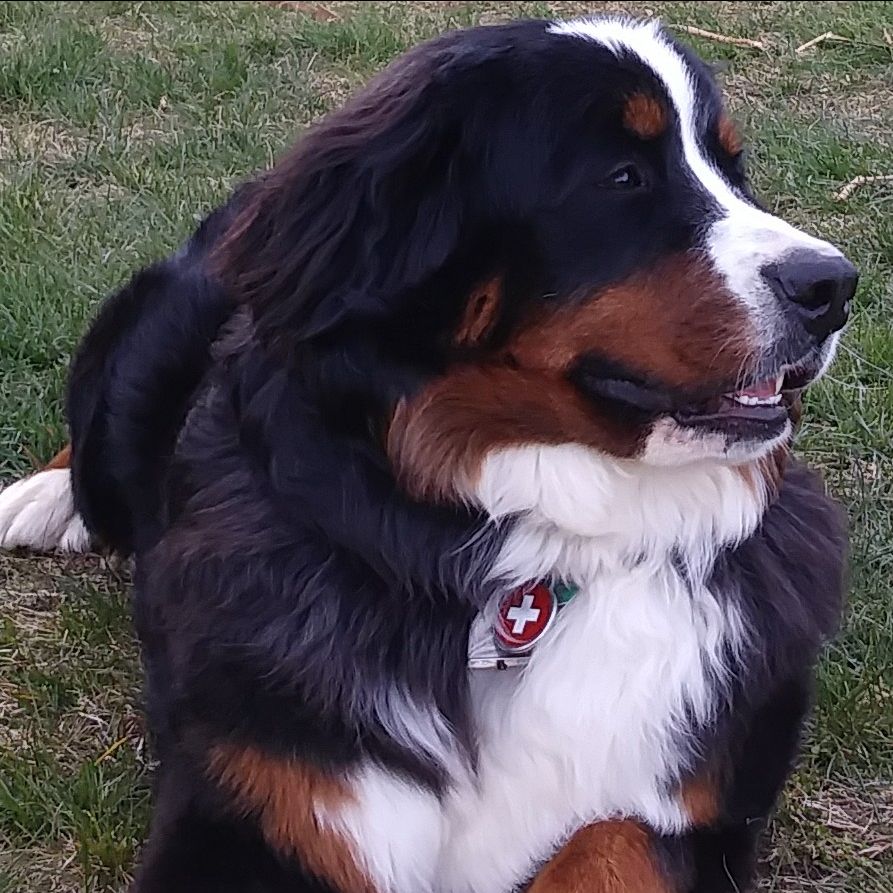 Lily came from a family friend who breeds Bernese Mountain Dogs. Debbie knew Lily’s parents very well and saw that they were very well-behaved dogs. Lily’s father was actually a show dog! Debbie had no doubt that she would be a great addition to the family.

Lily has always been able to make people laugh, especially when she hops backwards like a rabbit, or lays on her back to show her Buddha belly. She also loves to wave her front paws at people. When the litter was around six weeks old, Debbie received a video of all the pups together and noticed that one puppy kept waving her paw. Debbie hoped this was the pup who would pick her, and sure enough, it turned out to be Lily!

SpotOn has provided safety for a Lily, who has a natural instinct to explore.

Before the SpotOn System, Lily would run down the road and get herself into trouble. Being the independent woman she is, she would do everything on her own terms, testing her owners and boundaries frequently and going off to visit her doggie neighbor. She was always on lookout for everything and anything, sniffing out other animals like deer and leaving to go investigate. Debbie was constantly nervous and worried that Lily would leave the yard and get hurt by a car. Urgently looking for a containment solution for her smart, friendly, and sweet Berner, Debbie finally came across SpotOn Virtual Fence and was pleased to find out that it was a lot cheaper than other systems she was looking into. Now that Lily Mae has learned her boundaries, she stays on the property and gets spoiled often with her favorite treat of beef bones for being such a good girl.

“I was constantly having to keep an eye on her and found her up the road a couple of times. I was very nervous. Now I can relax a little more.” -Owner, Debbie Dross 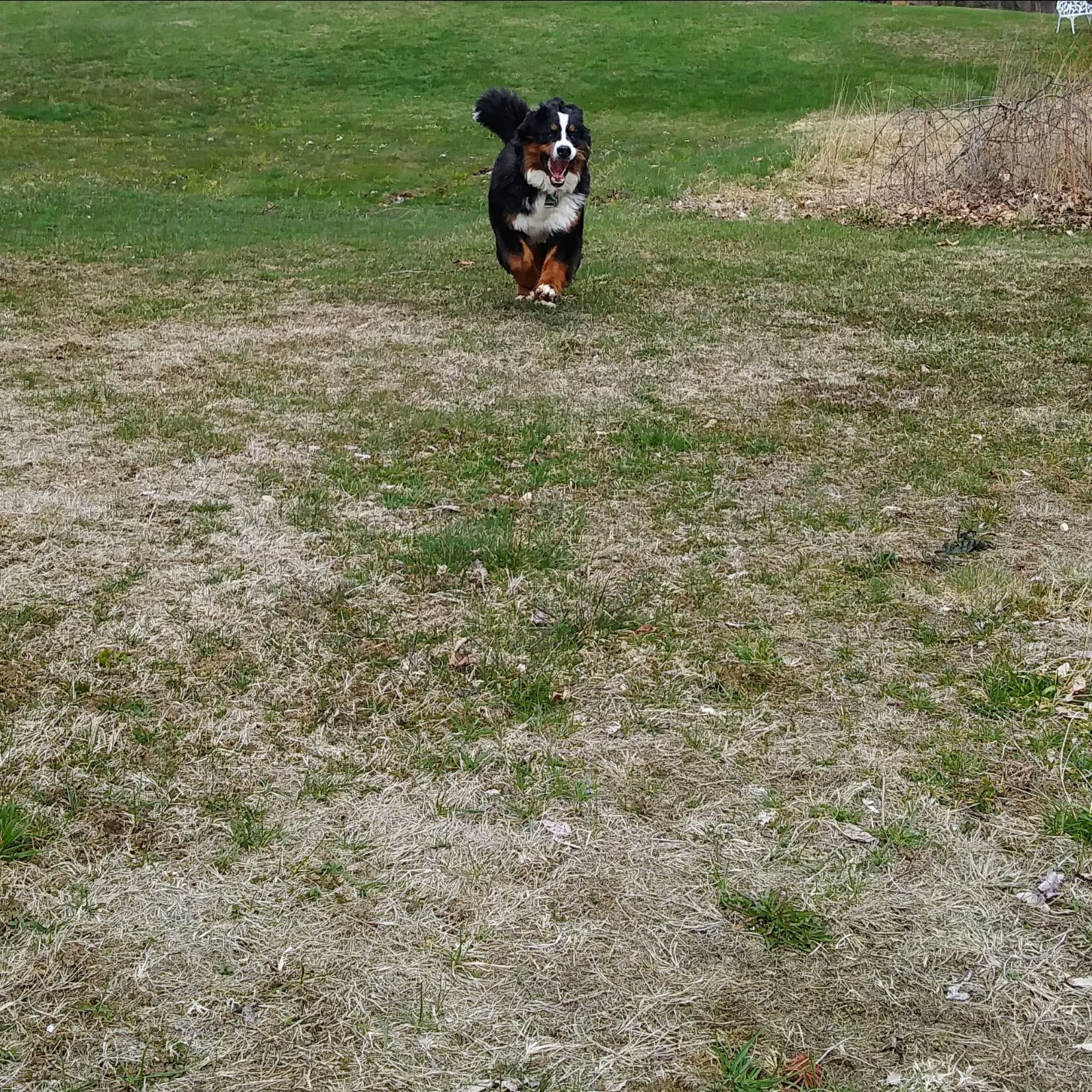 With the system, Lily Mae has nine acres to run around on and explore until her sniffer is tired at the end of the day. Lucky for Lily, the neighbors up the road have draft horses and hay the field three times per year to keep it nice for her so she has lots of room to roam.

When Lily thinks you're not looking, her favorite activity is finding sticks, rocks and pieces of wood and then stacking everything in the front yard. Always the playful pup, when her mom is outside using the hose, Lily makes the most of it, going after the water as she sprays it in different spots.

“She loves being outside where now I don't feel like I am constantly having to stay on her.” -Owner, Debbie Dross

Lily just can’t seem to get enough of the outdoors, always managing to keep herself busy and playing all day long. When it’s time for an on-the-go adventure, containing her excitement is next to impossible. All her mom has to say is “ice cream” or “go for a hike” and Lily’s tail goes crazy.

Lily looks forward to their four-mile hikes every Saturday morning and enjoys sticking her head out the window on the ride there; the whole family is very excited for what summer has in store with off-leash camping, thanks in part to their SpotOn Virtual Fence!

So how does such an active pup wind down? At sunset when it’s time to go inside, this gentle giant loves to cuddle and snuggle up on the couch before bed-time. 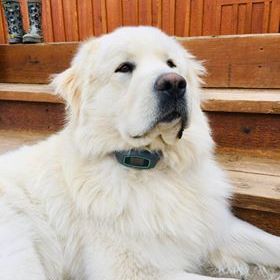 
Before the SpotOn,Yeti would roam over 200 acres getting into trouble- eating farmers’ ducks, exploring near a busy road or swimming in a stinky pond.... 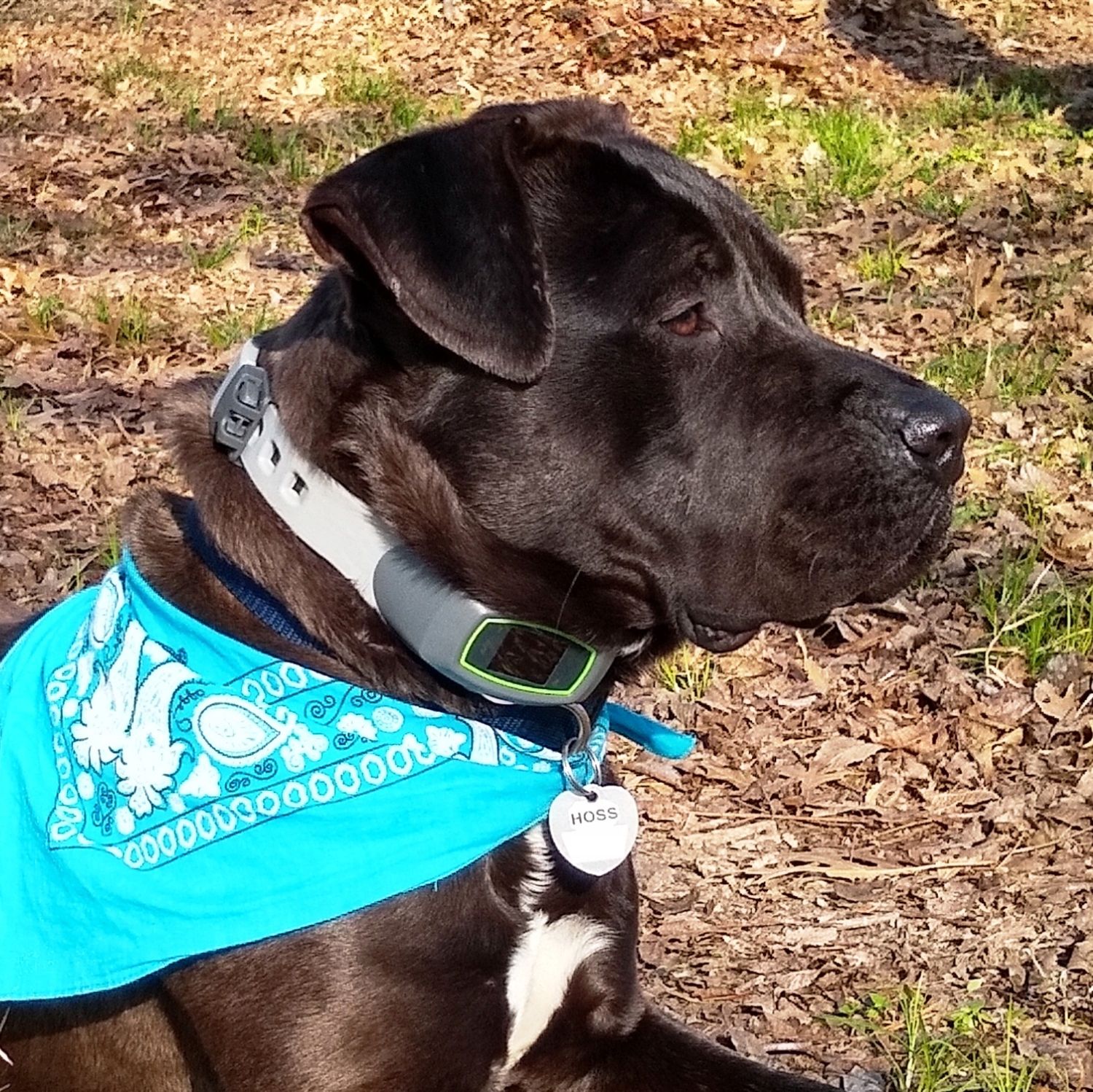 Free to roam with his forever family: Hoss's story


These days, Hoss spends his time with his forever family running around their two acre property, thanks to the SpotOn Virtual Fence... 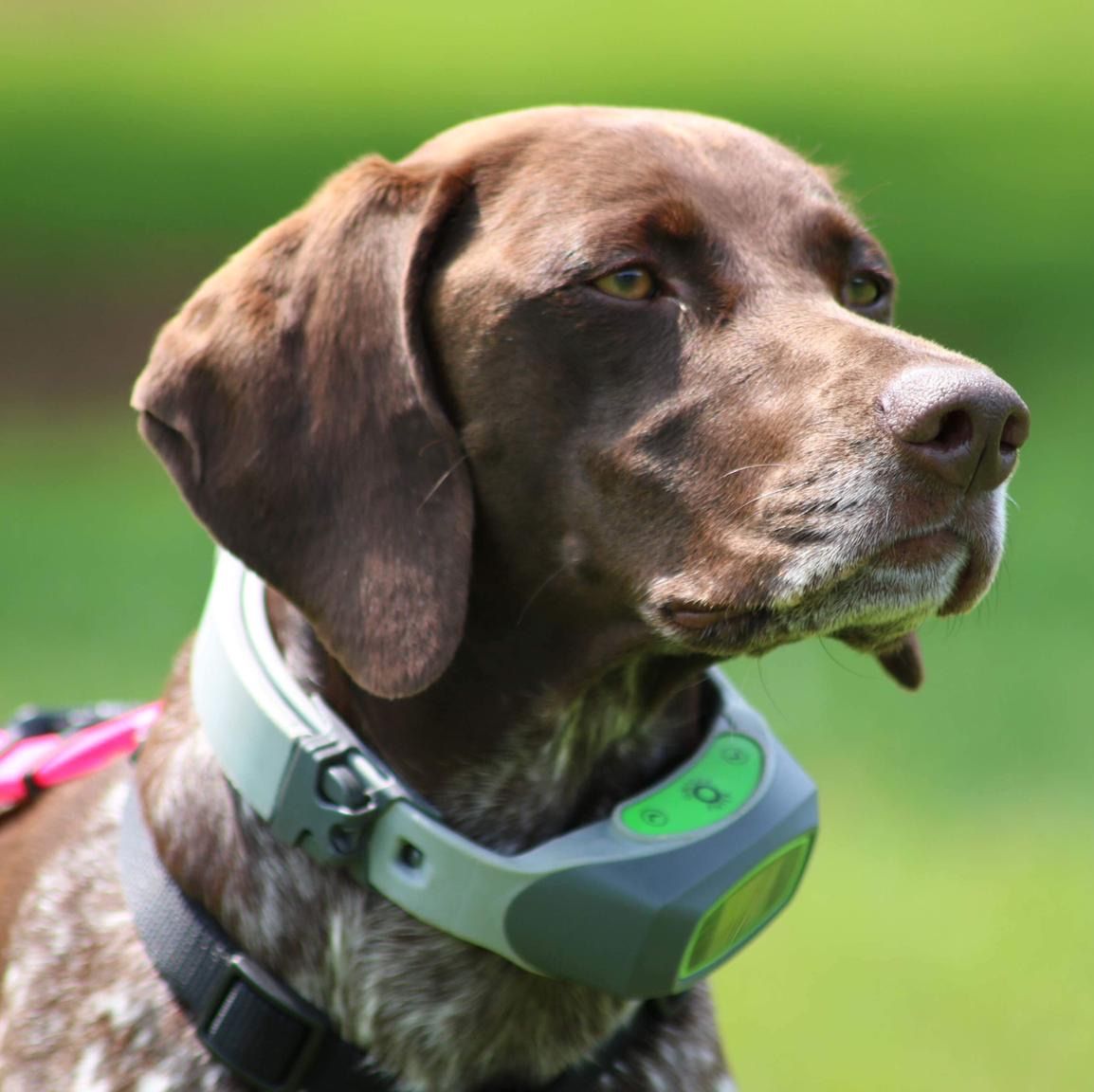 The world is your backyard: Finn's story